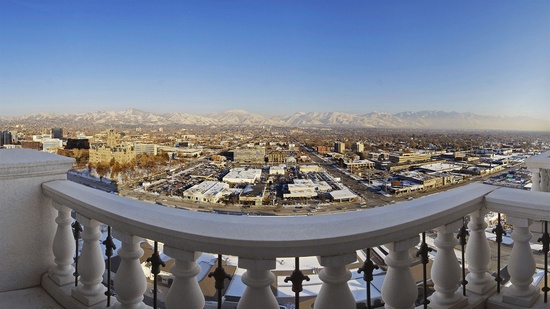 Emily walks into the suite then had taken at the Grand America, the the presidential suite, and it was more luxurious than she had hoped for Salt Lake City. But then she couldn’t remember when she had ever been here, so she had a skewed view of what it would be like. She had heard that the Mormon church (Well if we go by what they say Church of Latter Day Saints of Jesus Christ) controlled everything. What she had seen on the news thus far didn’t make it seem like they did, well not true, they did have their hand in a couple different election results, but still, it wasn’t involvement like she thought it would be. Emily knows that this show would be a bit different, but she also feels she has a decent chance to win. She walks into the room and her dad is looking at his laptop and shakes his head. He seems Emily and nods towards his computer.

Chris: Have you seen what Larissa said? Emily: You mean she really did say something? Chris: Apparently you might have hit a nerve. Emily: She’ll be lucky I don’t take a bat to her. Do I even…..do I want to see this? Chris: I hope so. I called the tv station down the street and was able to rent a camera crew for a bit. They’ll be here in about…half hour. He stands up, holding the laptop. Emily takes the seat he had been in and he hands her the laptop. She makes herself comfortable, and hits play…….

Emily: Come on dad, is she for real? Chris raises an eyebrow at her and cocks his head to the left. Emily rolls her eyes and then puts the laptop on the end table next to the chair. She stands up and stretches. Chris: What are you doing? Emily: Changing my shirt and brush my hair….and get something. I need a few minutes before you put me on camera. So get them set up, and I’ll be ready. Emily goes into one of the bedrooms and shuts the door. She goes over to the closet and finds the shirt she wants. She takes off the tshirt she had been wearing and puts on the light pink, nearly white, silk shirt. She steps into the bathroom and brushes her hair. When she comes back out she walks over to a duffle bag and pulls out what is probably her most cherished possession….the Alternative title belt. She looks at it, grabs the washcloth off the dresser, and rubs it across the face, making sure its clean. She hears a knock, and hears her dad’s voice. She opens the door and the camera crew are setting up. Chris looks at her and she smiles and goes over to him. Emily: Relax Dad, I have this. Chris nods, and goes to the camera crew, directing them to focus on the chair Emily had been sitting in earlier. She grabs a water out of the refrigerator, opens it and takes a couple drinks so her mouth hopefully won’t go totally dry. She picks her way over a couple electrical cords and sits down, placing the water bottle on the table next to the laptop, and the title belt in her lap. Granted the belt isn’t on the line at this show, but she is still Alternative champion, a position she loves having. The camera crew look at her. Emily: I’m ready whenever you guys are. On Camera Emily Desmond is sitting in an armchair, next to a table that currently holds a laptop and a bottle of water. Her dark hair is loose, with a piece of it tucked behind an ear, and she’s wearing a silk shirt, but one can tell it’s not a perfect white, but it’s hard to determine the color. .She has her legs crossed, and in her lap is the thing that sets her apart from others in SCW, the Alternative title. A title she’s held 537 days, an incredible feat not just in SCW, but anywhere. She looks up at the ceiling for a moment, and then she gazes out the nearby door that opens onto a small balcony where one can look down at Salt Lake City’s east side, clear up to the University of Utah. The outside crew are preparing for Christmas, finishing up a few small last details. Emily takes a deep breath, and lets it out, almost with a sigh, and then she looks at the camera. Emily: Larissa…..has no one ever told you that you should do your homework before you climb in the ring with someone. Especially where I’ve been in SWAT nearly two years, so it’s not like you have to search very hard to come up with intelligent things to say. Instead you chose to wholy focus on what I did say and you actually gave me a headache. You might ask why, and its because so many things in what you said are….so incredulous that I can’t believe you even dared to say them. They only served to make you look …..well I won’t say stupid, as that’s not what it does, but makes you look……well like you didn’t do your research. So along the way I hope to clarify a few things.

Now first off I’m glad you have something to occupy your mind, but I’m starting to think that you shouldn’t just make it a side thing you have going on, but make it not just your primary concern, but your only concern. But then if you make the mistakes that you made in approaching our match, mall restoring won’t be very profitable for you either.

You start off with something that screams you didn’t do some looking, because if you had you would know that I’m very well versed in submission. Hell I had a submissions only match back at Spring Meltdown and I took on a man who knows me better than anyone. I faced my own tag partner and even he knows that they man who trained me, who was in SCW years ago, is a submissions expert! In fact he taught me all he knew about submissions. Before you try saying he was some newbie or such, keep trying. The man has held titles around the world, hell he held the SCW tag titles twice, so obviously he knows his shit. You could have even asked Alzy about him, as they have faced each other, or about me for that matter, but again your lack of checking your facts screams so loud. So you know how to do an armbar, or as you put it, several of them. Yay for you? If that was meant to scare me, it didn’t even register on the meter. So let’s keep going.

I would hope that you respect me, given how long I’ve held this…..

Emily taps the Alternative title in her lap. And yes, I said your win over Jessica was a fluke. Well I’m sorry but I must stand by my words there, something had to be off in Jessica’s mind to even allow it to happen, and then you went and broke her arm even! Was that so she wouldn’t come racing at you for a rematch? Was that it was the only way you could win? I……I have to ask it because all of SCW wants to know why take it to that extreme, a simple submission move would have been just as effective. I’ve put people in….you name it, sharpshooter, figure four leglock, and a crossface, which is the one I’m most effective with, but I didn’t put them in it to injure them so they can’t compete for a few months. If that’s how you show respect my heart goes out to your other competitors in the months to come. Because seriously Larissa, that’s not how you do it. I don’t care if you’re training to be a wrestler, or even MMA. In fact breaking an arm might be seen as tame in MMA but this isn’t UFC or the like, this is WRESTLING. We want slow our opponents down, not risk a potential career ending injury. Emily picks up the water bottle, and takes a long drink. As she replaces the cap she seems lost in her thoughts, but she’s not there for long. You know Larissa when I started watching what you had to say, for a moment I was confused. Not because I had some blow to the head or such, but because you talk about the Dragon’s Lair. You know the only dragon I know around here is…..Jessica. Wait, did …..are you one of her dragons? Because if you were I wouldn’t hide it. But I have a feeling that you’re not because Jessica carefully picks the ladies, well anyone who is allowed to say they are one of her dragons, and seriously I’m pretty damn sure that she wouldn’t take you, partially because of your lack of training, but also because that away from the ring she would want you focused on HER enterprises. You went on and on about how you were this “red headed dragon”. Well I’m sorry but the red headed dragon that I recognize….and have a great deal of admiration and respect for….once again the name Jessica Tendonin comes to mind. You talk about how her ego will be knocked down, but are you really that dense? Because all you have done is awoke the dragon, the TRUE dragon, and she will come back with one thing in mind, and that is to end your career. Keep calling yourself the dragon and you will only serve to intensify her anger towards you.

Larissa that’s not how you earn respect in wrestling, around here especially. If you think that you need to maim and injure everyone, pretty soon you will find that no one respects you. I know right now you really aren’t earning points with myself or with Alzy. In fact I had to check, and let’s see…..